Home/Reviews/Outer Space By AudioThing
Previous Next

Audiothing Outer Space is a must have – bringing your creativity to a new level. Being a mixer, the importance of having a collection of plugins and analog gear at my disposal is paramount. Especially when I am in a creative block and in need of inspiration. This is where Audiothing Outer Space comes in handy.

While it looks like a Roland RE-201 when you first open it, the interface is very user-friendly. Personally, I have never used a real Roland RE-201 before (and I don’t think it is reasonable to compare it to the hardware because each hardware has a different tone).  It has simple parameters, which can work simultaneously to make infinite creative possibilities. With its options of a saturation box, spring reverb, and tape echoes, it provides warm, colorful, lo-fi and lush sounds, which is every mixers dream. Trying presets on a new plugin is always a good start, and with Outer Space, the limited presets really showcase the plugin in a good way. With its great old-school vibe, the absence of ilok, and a price tag of $49, you definitely get your money’s worth!

*     Instant toggle from mono to stereo (adds the 15ms difference between left and right signal) at the flip of a switch.


*     Innovative “Randomize” function for some out of the box sounds. (Right-clicking a parameter will prevent that parameter from being randomized.)

*     Built-in Spring reverb sounds beautiful. It is highly usable in mixing and is also lush, warm, lo-fi and subtle.

*     Input and Output volumes are great to overdrive the unit in conjunction with the limiter function to enhance the clipping effect.

*     Activating the built-in limiter on the “more” tab will generate more soft clipping to the audio; resulting in a pleasingly dirtier sound.

*     For the 3 different tape modes, they are all lo-fi sounding (high end rolled off with some saturation to it). The main differences are as follows:

*     Creating certain color, vibe, and motion to the delay can be achieved by changing the wow/flutter. This creates subtle pitch shifting/tremolo type effects.

“Noise” in this plugin is very fascinating. The EQ will shape the noise as well as the delay. The amount of noise can be adjusted by the volume control.

“Envelope On/Off” functions as a noise gate. When it is on, any delayed signal will activate the noise and it eliminates the annoying background noise across the entire mix while preserving the noise in the delay, which creates a “pseudo-hardware” illusion.

Ability to produce DJ scratching/pitching effects by putting the delay in sync mode with a long long intensity (feedback) and some automation on the repeat rate – useful for production or mixing.

But with all its perks, it is worth noting its cons:

*     I would have liked an Undo/Redo function in the event of accidentally pressing the randomize button.

*     The on/off button on the upper right corner is redundant for Pro Tools users. (Pro Tools Bypass Plugin function can cause some confusion injunction with the Audiothing Outer Space’s On/Off button.

*     Pre-emphasis function is found in the manual but missing on the interface. 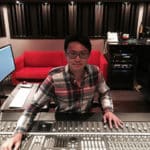